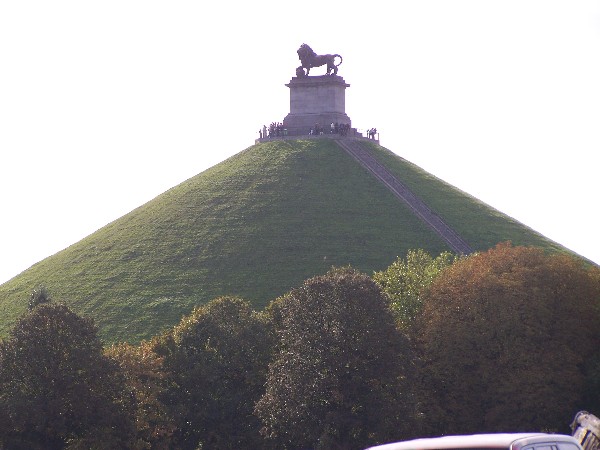 Waterloo is very nearby and several times we have driven past along the ring road and noticed the Butte du Lion standing tall off to the side.  So we decided to study up on the Battle of Waterloo and take a visit to the area.  Since it is such a huge part of European history - it put a stop to the French overtaking Europe and caused Napoleon to abdicate the throne - it is fairly "touristy" around the area and at the sites.

that very spot during the battle, the wax museum, the panorama painting that puts you into the center of the battle.

What impressed us most is the small size of the area, especially considering that about 360,000 troops and thousands of horses all fought bravely on this small spot!  The battle took place mostly on 3 farms in a very flat area that would have offered little to no cover for the soldiers on either side.  The farm buildings were just about all they had to protect themselves from each other.  I am not exaggerating when I tell you that the entirety of the battle area, including the rear positions, was about 4000 meters by 3600 meters (that's about 3700 football fields deep by 3300 football fields wide) - certainly not much space for that many soldiers!  The battle started at about 11:30 that morning and continued until about 8:30 that evening - 9 hours determining the fate of Europe and the turn of history from what Napoleon has hoped for.

Curt and Sonya liked figuring out how the battle played out.  At the Wellington Museum there are charts of the battle field at different points in

the day showing how each army had advanced or retreated at that point - we found it very fascinating to see how it played out.

Several websites are devoted to the area - the main ones are www.museewellington.com and www.trabel.com/waterloo/waterloo.htm .